Just 500 years or so after the death of Christ, the first monks arrived on Skellig Michael, an island 12km from Ireland's south west coast, lying at the very edge of the then known world.  The monastery that they established in this inhospitable environment remains one of the most remarkable testaments to human faith on earth. The island was the westernmost sacred site along a long line of ancient pilgrimage places running from Mount Carmel in Palestine through Greece, Italy and France to Ireland.
New Pilgrim Path is a website aimed at introducing fellow Christians of all denominations to the great wealth of online spiritual resources that our small team has discovered, and continues to discover. We provide links to, and a brief description of, a variety of websites we have visited and found valuable. We hope these links will help visitors to encounter the person of Christ.
To find out more about us, click here.
Website of the Week: 18 October

With Jesus in the Desert: A Retreat for a Time of Isolation

(For other online retreats visit our Online Retreats and Courses page) 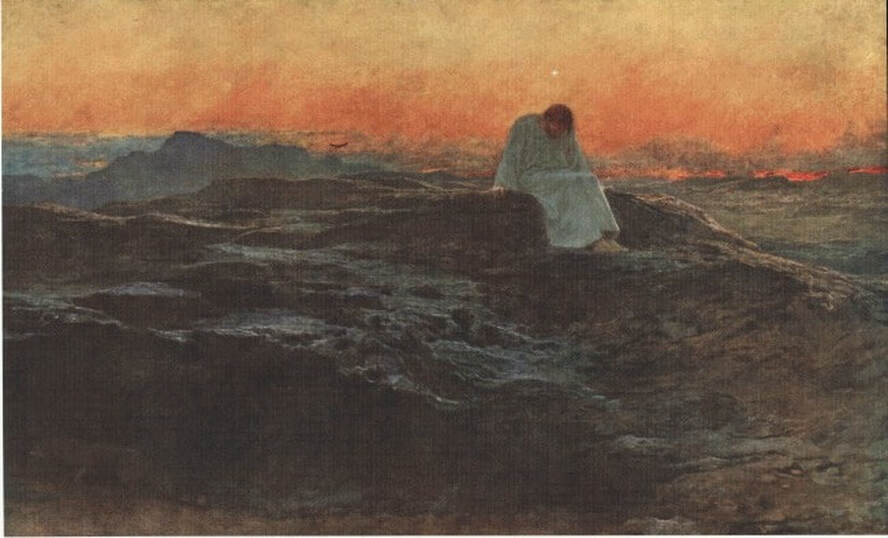 Christ in the Wilderness. Briton Rivière (1840-1920). Courtesy of the Guildhall Art Gallery.
As the days draw in and so many countries are entering another time of lockdown, the Australian Jesuits offer a guided online retreat specifically aimed at people who have to isolate themselves during the Coronavirus pandemic. There are two sessions daily - morning and evening. The suggestions on how to pray the retreat invite you to imagine yourself in different Gospel stories. Each day also includes a way of reviewing your day and how your heart has been moved during that day. This can be especially helpful if you find the time of isolation wearisome and dispiriting. The painting above vividly depicts Jesus' loneliness  and lassitude in his 40 days' solitude. Knowing that he experienced, and triumphed over, a silent, barren time we take comfort in the knowledge that he is both the Way and the Wayfarer.
Access this excellent spiritual resource here.