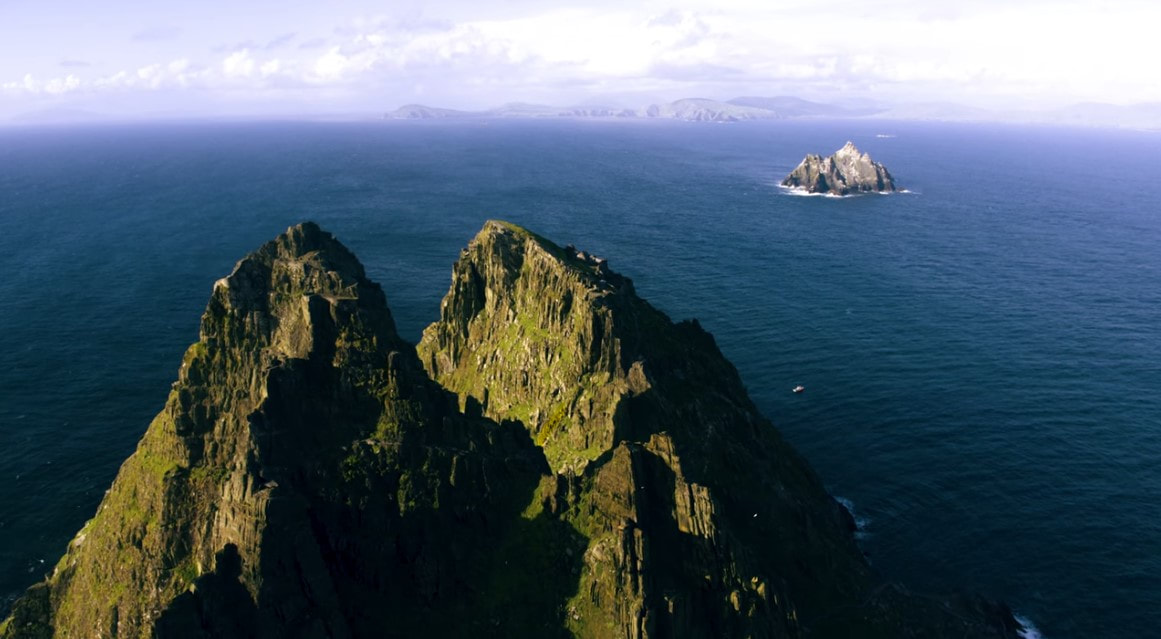 Many visitors to New Pilgrim Path ask about the significance of the breath-taking images of Skellig Michael on every page.

Just 500 years or so after Christ's death and resurrection, the first monks arrived on Skellig Michael (from the Irish Sceilg Mhichíl, meaning ‘Rock of Michael the Archangel’), an island in the open Atlantic 12km (8 miles) from Ireland's south west coast, lying at the very edge of the then known world.  The monastery that they established in this inhospitable environment remains one of the most remarkable testaments to human faith on earth.

Skellig Michael is one of two islands (the other, Little Skellig, is an internationally renowned sea bird sanctuary which has never known human habitation).  The larger island was the westernmost sacred site along a long line of ancient pilgrimage places running from Mount Carmel in Palestine through Greece, Italy and France to Ireland.

Skellig Michael has risen to unexpected prominence globally as a location in the massively popular  "Star Wars" films. Ancient meets new! Ancient meets new, too, in our 21st century pilgrimage. In bygone days, pilgrims typically stopped at holy sites along their way, to refresh themselves for the next stage of their journey. Today, our touch screens or keyboards can lead us on our path; websites can be the stopping points where we draw strength for our continued journey. Thus, images of Skellig Michael  seemed very appropriate for our website!

Skellig Michael was inscribed on the UNESCO World Heritage list in 1996: "All the physical components of the ideal small monastery exist on Skellig: isolation, difficulty in accessing the site, living spaces, buildings for worship and plots for food production. Here, amongst dramatic and unique settings, the indigenous stone architecture of a past millennium is intact... Skellig Michaelist is the most spectacularly situated of all Early Medieval island monastic sites, particularly the isolated hermitage perched on narrow, human-made terraces just below the South Peak." UNESCO.
This very short video offers stunning aerial footage of Skellig Michael, courtesy of photographer Peter Cox.
The most fantastic and impossible rock in the world: …the Skelligs are pinnacled, crocketed, spired, arched, caverned, minaretted; and these gothic extravagances are not curiosities of the islands: they are the islands: there is nothing else. The rest of the cathedral may be under the sea for all I know…An incredible, impossible, mad place…I tell you the thing does not belong to any world that you and I have lived and worked in: it is part of our dream world.  George Bernard Shaw. 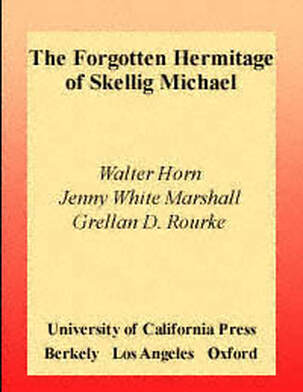 Even more isolated than the monastery is the 9th century  hermitage on Skellig Michael.  This enthralling book - which you can read online -  is a dramatically told account of Skellig Michael, an island off the west coast of Ireland. It is the story, pieced together from fragmentary remains, study, and conjecture, of a man’s attempt to live on a tiny ledge some 700 feet above the Atlantic on the outer edge of the European land mass, alone, as close to God as possible, in what is perhaps the ne plus ultra of ecstatic monastic solitude. Richly illustrated with maps, plans, and photographs that capture both the astonishing beauty and isolation of the hermitage, the text also includes reconstruction drawings of the site that combine a surveyor’s accuracy with an artist’s imaginative response to the hermit who found spiritual refuge on a pinnacle.


Forgotten Hermitage in the Desert of the Sea: The Forgotten Hermitage of Skellig Michael  by Walter Horn, Grellan D. Rourke, Jenny W. Marshall, and Paddy O’Leary [University of California Press, 1990].
Just over eight minutes long, this video by RTÉ television provides an introduction to the ecology and fascinating monastic tradition of the island.
Trailer for "Star Wars: The Force Awakens". It and its sequel, " The Last Jedi",  both feature Skellig Michael as a location.
"We needed to find somewhere completely from another time and place.Skellig Michael is an island off the coast of Ireland. We were completely blown away by it." "It's just indescribably beautiful". "It's a miracle, this place. We are indescribably honoured to be here". Some of the cast and crew of "Star Wars".
VISITING SKELLIG MICHAEL

Visiting Skellig Michael is not for the faint-hearted! If you are contemplating a visit, you should view this video!
Skellig Michael has been described as one of the world's greatest "thin places" - places at the convergence of the earthly and the spiritual worlds. This 30-minute video by Lightkeepers Films captures the otherworldly quality of the island.